RACA STRUGGLE TO BRING DOWN STAGS

RACA STRUGGLE TO BRING DOWN STAGS

Esh Winning's fine recent record at Kingsley Park continued with as they left with a point but only profligate finishing prevented them from taking all three, summarised by dangerman Nick Marley skying a Stags penalty with the score at 2-2 and facing a stand-in keeper in the goal. More bad news for Albion was that it looks like David Hansen may have broken a knuckle & could be out for some time. On a more positive front, the Kingsley Park attendance reached three figures for the first time this season.

Following the midweek penalty shoot out drama, RACA returned to league action hoping to claim a rare recent home win against Esh Winning. Both teams entered the pitch with their shirts inside out supporting the ‘If U Care Share’ campaign aimed at encouraging discussion and awareness ahead of World Suicide Prevention Day. The RACA team were accompanied by their U7 team, taking their duties as mascots very seriously. A minutes applause was held in tribute to Jimmy Rowe, the long-serving chairman of Newcastle Benfield who sadly passed away earlier in the week.

The home side kicked off and what was set to be an ill-tempered game began. The first free kick on this still, bright day was awarded to RACA after a push on Scott Jasper which was well-spotted by the referee. It was hit just wide of the far post. Esh Winning began to dominate the midfield and were quick on the attack. After gaining a free kick for a handball, the visitors made multiple attempts on goal and got their reward when a poorly cleared shot fell to Callum Boakes who curled it passed the keeper for 1-0.

The travelling side continued to harry the RACA defence and had a second free kick for handball headed to safety. Hansen pulled off a brilliant save as he dove across the face of goal to get a hand to Nicolas Marley’s low, driven shot. Esh Winning gave RACA little space in the midfield but after a great run down the left wing by Jamie Dunn, Jack Cooper got a cross away which the keeper collected easily. Most of the action was at the other end of the field and McLean shot just wide of the far post, an attempt which almost doubled their lead. Many of the fans thought they had when the ball was slid into the back of the net; the linesman, however had put his flag up to signal offside. This decision was met with protests, it was a very close call.

Esh Winning were beginning to show their frustration after the flag was raised against them for a second time but the travelling side still had their chances and Marley’s shot was hammered well wide. Another Esh Winning attack saw Mason Stephenson’s clearance rebound to Boakes who, with the keeper off his line, elected to cross rather than shoot; it was a huge let off for Albion. Towards the end of the half RACA appeared to be finally getting a foothold in the game and a spectacular solo effort from Jamie Dunn went just wide. The RACA equaliser came on 45+3 as one-two passing, weaving through the away defence, led to Dunn dodging Esh Winning keeper Hannant, and sliding the ball into the back of the net.

Esh Winning began the second half with everything to play for, hoping to gain three points against a team who have a poor home record against them. RACA had the first real attempt on goal, however as Hannant came out to save Cooper’s shot. The away team also weren’t without chances and forced David Hansen to come out and receive the ball which resulted in a nasty collision. After receiving treatment, Hansen played on though appeared to be in considerable pain with his left hand.

Esh received a corner and Boakes’ effort went just wide of the left hand post, but a well worked goal for RACA followed at the other end as Scott Jasper slotted past the keeper after a great through ball from James Thompson for 2-1. The visiting team weren’t slow in redressing the balance as Marley took his chance after a goalkeeping error to fire into an open goal. After Sam Norris shot just over the crossbar in a bid to give Albion the advantage, David Hansen was finally forced to go off due to his hand injury. He was replaced in net by Jamie Dunn as no substitute keepers were available.

Dunn was immediately tested but he collected a strong shot safely. RACA began to get scrappy at the back and shortly afterwards gave away a penalty. Dunn was not required to make a save, however, as the ball was skied way over the bar by Marley, a huge relief for Ryton and Crawcrook. A goalmouth scramble at the other end only just prevented RACA from taking the lead but the match ended 2-2 with points shared between two competitive teams. 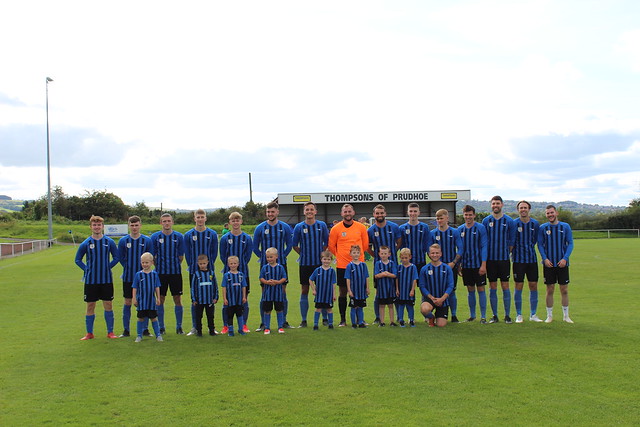